The Devil is a Part-Timer Volume 1

はたらく魔王さま! by Satoshi Wagahara
My rating: 5 of 5 stars

Demons. Heroes. A classic story of good versus evil—well, that's how most of these stories go. The Devil is a Part-timer isn't exactly what I would call your typical tale.

This story is about Sadou Maou, once a demon lord from another world, now a part-time employee at MgRonalds.

Yes, I am perfectly aware that MgRonalds is a not-so-obscure reference to McDonalds. What can do you? 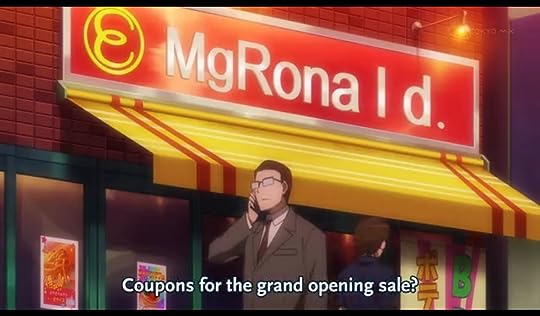 The first thing you need to know to understand this light novel is how a demon lord end up in such a situation. The story goes back to six months, in a world known as Ente Isla. It all happened during the final climactic battle between Emilia the Hero and the Demon Lord—or what would have been the climactic battle had the demon lord not opened a gate to another world and retreated through it.

Thrown into Tokyo, Japan—because, let's face it, everything supernatural that happens only happens in Japan—the demon lord and his most trusted general, Alciel, begin their new life, which is about the crappiest life I've ever heard of.

So, after having their asses handed to them and retreating through the gate to arrive in Japan, Maou and Alciel forge false identities. The demon lord assumes the name Sadaou Maou, which, if you know your Japanese, Maou is a play on the word devil. Alciel becomes Ashiya, and together, the two of them find a really cheap apartment that looks like it might collapse at the slightest provocation. 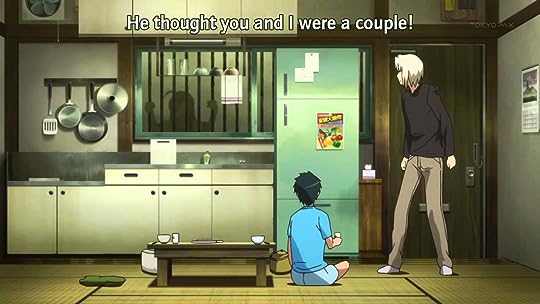 Here they forge ahead with their new lives while trying to regain their magical energy. Here's an interesting fact. Because gods and demons don't exist on Earth, Maou and Ashiya are unable to regain their magical force. In either event, Ashiya has assumed the role of househusband. Meanwhile, Maou works part-time at MgRonalds. His goal? Become a manager to help him in his conquest of taking over the world... or something like that.

On his way to work one day, Maou comes across a young woman stuck in the rain, and, being the helpful demon lord that he is, he offers the woman his umbrella. Of course, little did he know that this woman was, in fact, his nemesis, Emilia the Hero. Later on, after a good day at work in which he gets to spend time with his cute co-worker, Chiho, who he just calls Chi, Maou is confronted by Emilia, who tries to kill him with a knife. 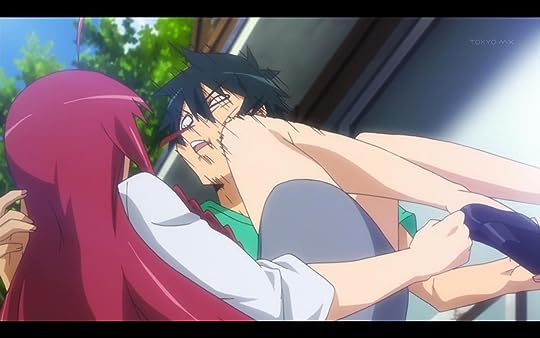 I suppose it's a good thing that killing in broad daylight is illegal in Japan. Emilia and Maou are caught by the police, who are under the impression that this was some kind of marital dispute. Emilia doesn't seem to take this well, and she lashes out at Maou, who seems to care very little about what happened. The two of them part ways on bad terms, and after that, Emilia, who goes by the name Emi Yusa, begins to stalk Maou everywhere he goes.

You know what I really like about this series? It's how the story deals with mundane, every day life. I know, that sounds really weird, but you have to consider the other factors. First, this is about a demon lord, his henchmen, and the hero who wants to kill him, living an ordinary life in Japan. The mere idea of these three figures living like regular humans is unfathomably ridiculous. Who the hell has ever heard of a demon lord working part time at a fast food restaurant?

Another great aspect of this series is the witty banter. Now, I'm a great fan of witticism. I enjoy stories when they have dialogue that can keep me entertained, and The Devil is a Part-Timer has some of the best dialogue I've read in a light novel. I think it might even be better than Spice and Wolf in terms of comedy if not intelligence.

Outside of the humor, this story manages to adequately convey the feelings and emotional connections of its characters. Of course, some of those connections are outright hatred, such as the bond between Emilia and Maou. It's probably a good thing we've got Chi, the cute high school girl who works at MgRonalds with Maou.

Chi serves as an excellent contrast to Emilia. Both of them are about the same age. However, where Emilia's actions and emotions are in line with those of a young woman who's undergone numerous hardships, Chi is your average 16 year old girl. These two form an interesting juxtaposition, and they make an excellent counterbalance for each other.

While the first half of volume 1 dealt with the struggles of Maou and Ashiya conforming to Japanese society, the second half becomes a lot more action packed. An unknown assailant attacks Emi and Maou. What's more, this unknown assailant can use magic. Who is the mysterious attacker? What does this person want with Maou and Emi? You'll have to read the light novel to find out...

… or you could, you know, watch the anime, which is actually pretty good.

View all my reviews
Posted by Unknown at 7:14 AM No comments: