I think 2016 has been a great year for anime. We've had a number of excellent series come out, including the second season for Shokgeku no Soma and a new season of D. Gray-Man. However, while we've had a lot of good anime, there were still a lot of bad anime. Fortunately for everyone involved, New Game is one of those anime that is actually highly entertaining despite not sounding all that exciting.

So, the premise for this anime is pretty basic. You've got Aoba Suzukaze, who, immediately after graduating from high school gets a job with a video game company. Now, I'm not gonna go into how unrealistic this is, nor am I going to harp on about how someone who doesn't know how to model would never get a job in character modeling. While this is unrealistic, I don't think it necessarily matters, and to me, it doesn't take anything away from the series. 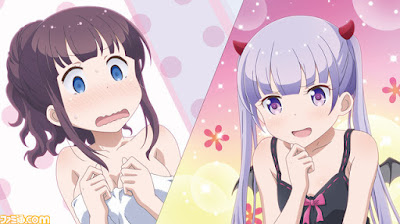 Like most slice of life anime, this show doesn't have any real plot. It's basically giving us the daily life of Aoba as she works at creating a video game with her fellow game developers. For the main cast outside of Aoba, you've got Hifumi Takimoto, Yagami Kou, Ijima Yun, Shinoda Hajime, and Tooyama Rin. Perhaps not surprisingly, all of these characters are girls, and all of them are exceedingly cute.

Each member of the cast seems to represent a different life-style. Hifumi is an excellent character modeler, but she's very shy around people and doesn't like to talk much, though she's apparently super friendly when texting. Ijima is sort of like the loli of the group. Not only is she short and young-looking, but she wears classic lolita clothes and has a tea set that she sometimes breaks out during work hours. Shinoda is the enthusiastic and always moving animator. She strikes me as highly athletic, and Tooyama Rin is the hard working and respectable art director. All of them have a personality that vastly differs from the other, which sometimes leads to comedic missunderstandings. 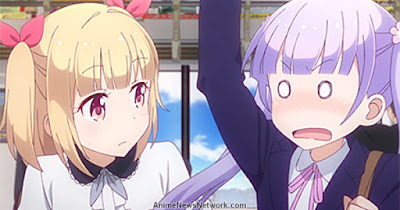 My favorite character of the series, however, has to be Yagami Kou—and no, it's not just because she likes to wear nothing but a pair of panties while she's sleeping. Yagami is probably the most interesting of the group outside of Aoba, and I would say she's even more interesting than our main character. She's always staying late at the office to get her work done, which makes her seem very dedicated to her profession. She lives, eats, and breaths character design. However, for as hard working as she is, she has some really odd quirks and seems super lazy about things like her appearance. Of course, the biggest of those quirks is that when she sleeps at the office, she doesn't like to wear pants.

Like I was saying before, a lot of the anime is based on these characters interacting with each other and causing some comedic misunderstandings. A great example of this was in episode 5, where Rin and Yagami were working late. The topic of their conversation somehow ended up on how Yagami always sleeps in her underwear. Yagami said that it's a lot more comfortable and that Rin should try it. Rin refuses. However, after Yagami falls asleep, Rin wakes up and decides to see what it's like. Naturally, Yagami wakes up to find Rin without pants on and teases the hell out of her. 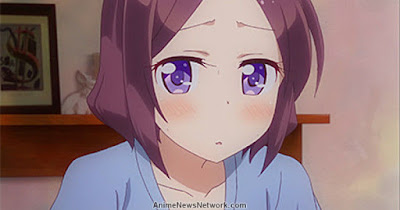 This sort of interaction is what makes this anime so worth watching. Yes, there isn't much of a story, but not every anime needs to have a story to be enjoyed. It's the little things, the small details, and the every day interactions, that make it such a fun show to watch.

Something else that I want to discuss is the artwork. Now, I don't usually talk about the art because I honestly don't care very often. Artwork in anime has become pretty generic these days thanks to studios like A-1 pictures, who you'll probably know as the people that produced such anime as Sword Art Online and Asterisk Wars. 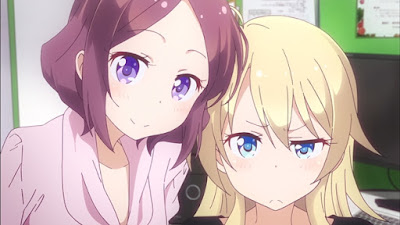 The artwork for New Game is incredibly cute. The colors for the characters are all very bright and vibrant, and their eyes are large and have a reflective quality that makes them seem more expressive than most anime characters. This also gives them an innocent appearance, which is used to further highlight the nature of this anime.

The nice use of vibrant colors for the characters and plainer colors for the background serves to emphasize what this anime is about and makes the characters pop out more. There are also times where the world around our characters will disappear to be replaced by sparkles and various colorful backgrounds. This enhances the cuteness to “oh, my god too much fluff!” levels. While that can sometimes detract from a story, in this case, I feel like it merely highlighted what this story was about. 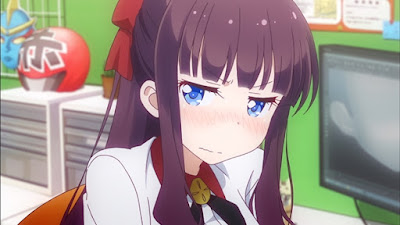 One thing you'll notice as you continue watching this anime is that there are no male characters, and there shouldn't be. First off, this anime isn't a romance. It's just an anime about cute girls doing cute things. Second, part of the charm to this anime are the various yuri moments that happen between our characters.

The perfect example of this is actually the first meeting between Aoba and Yagami. When they stand face to face for the first time, Aoba blushes, the background changes to one of vibrant rainbows, and a heart suddenly pops up between the two. There are numerous moments similar to this one, which helps set the tone and mood of the series.

If there was one failing of this show, it would be episode 6, which is the episode that doesn't involve Aoba working with her colleagues. I understand that the purpose of this episode was to show what everyone's life was like outside of work. However, compared to the other episodes, where I got to enjoy watching all of the cute and funny moments between Aoba and her co-workers, this one didn't have the same level of humor. That said, it does help introduce Nene, Aoba's best friend who becomes a part-time worker as a game tester, so I guess you could say this episode was sort of like an introduction episode.


All that said, the biggest question on everyone's mind—at least, I hope it's the biggest question on everyone's mind—is whether or not New Game is Worth watching. That would be up to you. I personally found this show a joy to watch. If watching an anime that's about cute girls doing cute things is something you like, then this show is definitely for you.
Posted by Unknown at 1:30 PM No comments: